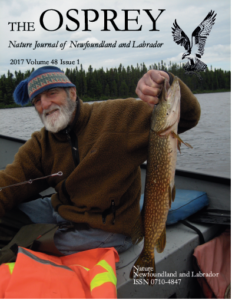 The Osprey is a source of information on various aspects of the province’s natural history such as birds, plants, insects, mammals, general ecology and philosophical nature musings. All members of Nature Newfoundland and Labrador can access The Osprey. Access the latest issues here.

A letter to our dear friend John from Bill for family and everyone.

A snap shot of John Gibson’s contributions to Nature Newfoundland and Labrador and the Natural History Society.

John Gibson was a tireless environmental critic in matters regarding fish and fish habitat.

A Tribute to My Friend, John Gibson

A tribute to John Gibson and his work with urban waterways.

Snowshoeing in a Winter Wonderland

By Allan Stein and Michael Collins

John Gibson was awarded the Tuck-Walters Award in 1986 for his contributions to conservation and natural history.

Short memories and stories about John Gibson from various friends and acquaintances.

Brendan Kelly is the winner of the 2017 Wild Things Scholarship.

A fishing trip to Minipi Lake by two “greats” in fish biology.

Bees, Agriculture and the Precautionary Principle

Event report for the Annual Whale Festival at Cape Spear.

The Disappearance of Millions of Newfoundland Seabirds

Storm Petrel populations may be declining due to offshore developments.

We have another night of trivia happening this weekend!Get the team together and join us on Friday, January 27th for some trivia, fun and beers! You can register your team between 7:30-8pm, and trivia will begin just shortly after! Registration is by donation, and we're collecting donations for Nature Newfoundland and Labrador. You can also pitch in by drinking beer from our #givebacktap! Winners get a free round of beer and bragging rights!See you on Friday! #portrexton #nlcraftbeer #prbtaproom #prbevents #newfoundland #portrextonbrewery ... See MoreSee Less

When this happens, it's usually because the owner only shared it with a small group of people, changed who can see it or it's been deleted.
View on Facebook
· Share

Thank you to everyone who joined us yesterday for our Soundscapes of the Ocean public talk 🐟🐋🌊🦐 It was a full house at The Johnson Geo Centre and lots of people from across the province joined us online!It was a unique opportunity to listen to the sounds in the sea 🌊 We got to listen to sperm whales, sei whales, blue whales, humpback whales, snapping shrimp, cod fish, and dolphins! #naturenl #newfoundlandandlabrador #explorenl #oceanconservation #saveourseas #noisepollution #soundscapes ... See MoreSee Less

We can't wait for tomorrow evening! Join us The Johnson Geo Centre or on Zoom for an evening full of whale song 🐋🎼#naturenl #newfoundlandandlabrador #explorenl #cetaceans ... See MoreSee Less

When this happens, it's usually because the owner only shared it with a small group of people, changed who can see it or it's been deleted.
View on Facebook
· Share

Join Nature NL as our new Marine Conservation Volunteer! 🐋🌊 We are looking for a dedicated volunteer with a keen interest in marine wildlife to support us in our marine outreach activities. Check out the position description on our website under "Get Involved" --> "Volunteer". #newfoundlandandlabrador #explorenl #naturenl #oceanconservation ... See MoreSee Less